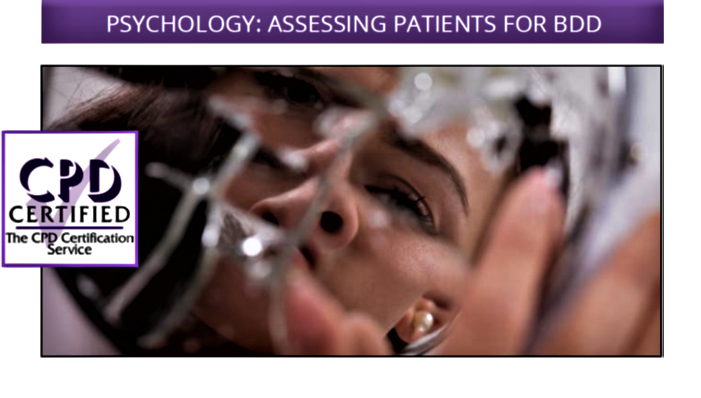 UNDERSTANDING THE ABCs OF BDD

Body Dysmorphic Disorder (BDD) is a common problem in aesthetic practices, yet the condition still remains under-recognised and under-diagnosed especially within the aesthetic field.

As a faculty member of ESAG (European Society of Aesthetic Gynaecology), I have launched an accredited CPD course worldwide on “Recognising and Assessing Body Dysmorphic Disorder in Aesthetic Practice”.

When people think of mental illness related to body image, the first thing that usually comes to mind is anorexia or associated eating disorders. But, the lesser known Body Dysmorphic Disorder is five times more prevalent than anorexia, and causes higher levels of psychological impairment. BDD was originally described as 'dysmorphophobia' by an Italian psychiatrist, Enrico Morselli, in 1891.

‘Subjective feeling of ugliness or physical defect which the patient feels is noticeable to others, although the appearance is within normal limits.

The dysmorphophobic patient is really miserable in the middle of his daily routines, everywhere and at anytime, he is caught by the doubt of deformity' (Morselli, 1891). Morselli coined the term 'dysmorphophobia', but it is used less often nowadays.

Patients with BDD have a pervasive, subjective feeling of ugliness regarding some aspect of their appearance, despite a normal or nearly normal appearance. They are convinced that some part of their body is too large, too small, or misshapen. To other people, the appearance is normal or there is a trivial abnormality. In the latter situation, it may be difficult to decide whether the preoccupation is disproportionate.

The common concerns are about the nose, ears, mouth, breasts, buttocks, or genitalia. BDD patients are constantly preoccupied by their beliefs, feeling that other people notice and talk about the supposed deformity, and they blame all their difficulties on it.

BDD is primarily a mental health problem yet patients usually consult dermatologists, plastic surgeons, other specialists or general practitioners, but not mental health specialists, because patients with BDD firmly believe that their disorder is a physical problem.

Freud (1959) and subsequently Brunswick described the most famous case of BDD, known as the 'Wolf Man', who was preoccupied by imagined defects of his nose. The Wolf Man was a Russian aristocrat who had a recurrent dream of white wolves sitting staring at him from the bare branches of a tree outside his bedroom window in winter. The interpretation was that his nose represented his penis and that he desired to be castrated and made into a woman.

BDD affects 2% of the general population with an even higher percentage seeking cosmetic surgery (8 to 15%). Regardless of the statistics, plastic surgeons can expect to see BDD patients in their office. As many as 10% of Clinical Practitioners will miss the diagnosis of BDD.

The suicide rate is 45 times higher than the general population.

Greater than 90% of BDD patients are unhappy after cosmetic surgery, which can actually worsen their condition.

Many experts on BDD strongly suspect that Michael Jackson suffered from this condition. The tragedy is that it was not recognised or treated. Only someone with BDD would be able to understand the true depth of torment and self-hatred they have for the shape of their genitalia or nose and skin when looking in the mirror.

Unfortunately, the majority of individuals suffering with BDD don’t possess a full insight into this disorder and can believe their problem is physical rather than psychological, making them seek cosmetic/surgical intervention instead of a psychological intervention. BDD shares many of the characteristics of OCD in that a lot of the behaviours associated with BDD is a result of misfiring in the amygdala region of the brain, which controls our emotions. This is the part of the brain that sounds an alarm and makes us stressed if things aren’t right. Ordinarily  the amygdala lights up in response to a stressful situation. However, brain scans show it lights up randomly in sufferers of BDD, who then seek to attach something to the stress.

Co-morbidities such as social avoidance, depression, anxiety and suicidal ideation are common lifetime prevalences, with 24-28% for suicide attempts.

In an observational study of 200 people with BDD, followed up for almost five years, the rate of completed suicide was 22 to 36 times higher than the general population.

It is important to recognise patients with BDD in aesthetic practice for the following reasons:

Once the diagnosis of BDD has been established, sympathetically discussing this with the patient is crucial, however it is important to still acknowledge that there is a visible difference in their appearance, (if there really is one). Dismissing the concern, trying to reassure the patient that they look fine, or telling them that they should not worry is usually ineffective. Do not argue about the diagnosis; listen carefully and with sympathy to the patient’s story but allow enough time for discussion.

CBT is a form of psychotherapy that emphasises the importance of underlying thoughts in determining how we feel and act. Through working with a CBT therapist, someone with BDD can uncover thought/behaviour patterns that make anxiety, self-criticism and social withdrawal worse. CBT is also used in the treatment of body image issues to reduce repetitive behaviours, (such as mirror checking and excessive grooming).

Medicated treatment is with antidepressants which are strongly “serotonergic”. The dose may need to be in the high range and taken daily for at least 12 weeks to determine its effectiveness. The medication may provide either a total cure or no benefit at all. If the drug is effective then a person will need to remain on it for at least a year, often longer, as discontinuing the medication may lead to high rate of relapse. It is not known how the medication 'works', but it may do so in the absence of depression. Such a drug may be used either alone or in combination with Cognitive Behaviour Therapy.

Recognition of the condition may be achieved with proper screening with validated questionnaires. There are a number of questionnaires available from various organisations, such as:

The BK-DGAQ asks specific questions related to the participant’s genitals rather than body image more generally. It is currently being developed at the University of Oxford in collaboration with ESAG. A small sample study has already been conducted and currently a larger scale study is on its way. The initial aim was to validate the BK-DGAQ, in the hopes that it could be used as a screening tool for BDD in women seeking labiaplasty. The BK-DGAQ #20 results are represented by the total score, with a maximum of 80 possible. Higher scores on this questionnaire represent a higher likelihood of BDD and a greater dissatisfaction with genitalia. The initial results indicate that the BK-DGAQ #20 seems to demonstrate good internal consistency and be an appropriate tool for demonstrating perceptions and feelings towards genitalia.

In the control group, the BK-DGAQ #20 was found to correlate with the COPS and the BDDQ. This indicates that the BK-DGAQ #20 is measuring perceptions towards genitalia and correlates with measures of body dysmorphia, perhaps demonstrating its clinical use as a screening tool.

To express your interest in the BKDGAQ#20, please contact Dr A. Bader: doctorbader@gmail.com

Anyone interested in participating on the CPDaccredited ESAG course, please contact info@esag.org for more information and dates.

Referral to a mental healthcare specialist may be necessary in the management of BDD. The role of a dermatologist, surgeon or aesthetic practitioner is to prepare the patient for potential psychological help. Without necessary preparation, the patient will usually refuse to seek psychiatric treatment and may continue their journey with other cosmetic doctors.

Discussing the distress caused by their concerns may help patients to understand the need for mental health referral. The patient should be informed that this is a recognised problem and there is successful treatment, however some may not be ready during the first consultation to accept that idea. Do not force them, just allow them enough time; keep a good professional relationship and ask if they would like to come again. Referral to a local psychologist may be easily accepted by the patient as they may feel more comfortable as many patients may not want other people to know that they need psychological help.

Based on my personal experience treating patients with BDD, the majority may be driven by media pressure in a ‘celebrity’ culture, together with greater availability and popularity of cosmetic procedures.

Early recognition of BDD may help to prevent progress of the disease, to improve quality of life of the patient and of their family, and may even help to save the life of the patient as well as the reputation and well-being of the practitioner. When referring to a therapist, it is important to locate one with CBT training who has experience not only treating patients with BDD but also with eating disorders, OCD, and depression. Furthermore, collaboration between the psychologist and the aesthetic practitioner is essential.